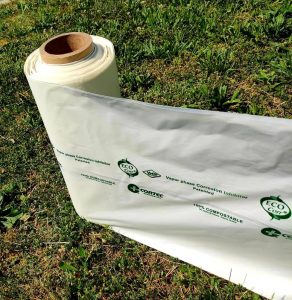 EcoCortec® is very excited to receive industrial composability certification of it’s Eco-Corr® Film. Eco-Corr® is the first biodegradable and compostable packaging film that provides contact, barrier, and vapor-phase corrosion inhibition. EcoCortec® received the ‘OK compost INDUSTRIAL’ certificate from TÜV Austria. This certifies that Eco-Corr, biodegradable, VpCI® film, conforms to the criteria for industrial composability under EN 13432 (European equivalent of ASTM D6400). EcoCorr Film® will disintegrate into carbon dioxide and water within 2-3 months in a composting environment. Certification of EcoCorr® is huge step toward making green corrosion protection packaging more versatile and widely available around the globe. EcoCortec’s team is immensely proud and enthusiastic of compost certification for this breakthrough packaging film.

Eco-Corr® has been continuously improved for several years by company’s specialists in cooperation with scientific intuitions . This film is viable option for use in countless industrial applications and is an excellent replacement for conventional VCI films that present significant threat to the environment. Other than being environmentally friendly, it is a cost effective option as users are spared of expensive disposal procedures. Eco-Corr® is available from Cortec’s European plant, EcoCortec®, located in Croatia as well as North American film production base, Cortec® Advanced Films. Both plants are daughter companies of global corrosion protection manufacturer, Cortec® Corporation. Eco-Corr Film® is shelf stable and will not break down prematurely until disposed in a proper composting environment. Metal parts packaged in Eco-Corr Film® receive continuous protection against salt, excessive humidity, condensation, moisture, aggressive industrial atmospheres, and dissimilar metal corrosion. The Vapor phase Corrosion Inhibitors will vaporize and then condense on metal surfaces in the enclosed package. VpCI® reaches every area of packaged part, protecting its exterior as well as hard to reach interior surfaces. Users will get complete product protection during storage as well as during domestic and overseas shipments.

A Czech subsidiary of one of the world’s three largest car manufacturers, selected Eco-Corr Film® as a biodegradable substitute to reduce the amount of conventional plastic packaging they use. They tested EcoCorr Film® as part of their new “green” logistics project aimed at decreasing plastic consumption. Eco-Corr Film® was tested as part of the pilot project of packaging car parts for shipment to their plant in Pune, India. Several tests were conducted for compliance with strict conditions for transport in sea containers. Quality control did not show any damage or traces of corrosion on the components wrapped in Eco-Corr Film® upon arrival in India. In order to test if the film were able to be composted according to plan, the staff built compost bins near the plant. After six months, the foils had largely disintegrated in the compost bins, helping them to eliminate plastic waste. Eco-Corr® successfully replaces conventional plastic films they used previously and provides the same effective corrosion protection. Composted packaging material is being used as soil improver at the plant’s logistics park. Manufacturer was able to cut the amount of conventional plastic packaging in half thus eliminating a significant amount of plastic waste (as much as 500 kg) per month).

Make the transition to “greener” packaging by contacting EcoCortec®: https://ecocortec.hr/eng/index

We use cookies to ensure that we give you the best experience on our website. If you continue to use this site we will assume that you are agreeing to our Privacy Policies.
All search results