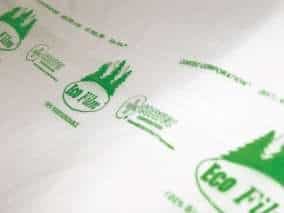 What if consumers could just throw a plastic bag onto their backyard compost heap when they were done using it? Cortec® is offering a new film formulation that can allow plastic bag users to do so. A longtime leader in “green” film technologies, Cortec® is seeking to forge yet another path toward greater environmental responsibility with the development of Eco Film® II Backyard Compostable.

Explore the Benefits of Eco Film® IIThe most exciting feature of Eco Film® II is that it reduces the risk of plastic pollution and waste buildup. Instead of accumulating in oceans and waterways or piling up in landfills, Eco Film® II can be turned into soil rather than another environmental pollutant. It provides one more environmentally responsible disposal route in addition to the options of plastics recycling and commercial composting, all while bringing the process closer to home. It also opens up more options for stores, customers, and homeowners who need plastic bag alternatives in the face of increasing restrictions on single use plastic bags in many areas.

Imagine the Possibilities of Eco Film® IIEco Film® II is intended for use wherever a backyard compostable bag is needed or desired. One of the first instances that comes to mind is the collection of organics waste. Organics recycling programs are becoming more popular all the time—sometimes as citywide mandates, other times as a reflection of personal or organizational environmental conscientiousness. Using Eco Film® II as an organics waste bin liner would bypass the need for citywide pickup (a major use of human and energy resources) and keep disposal on site at home and personal. Eco Film® II could also be used for collection of yard waste to be composted onsite, rather than being hauled to the community compost heap.

Another intriguing possibility is the use of backyard compostable bags for shopping bags or product packaging. This could allow the consumer to buy the package or goods, take the items home, and throw the wrapper in the backyard compost heap instead of sending it to the landfill, recycling facility, or community commercial composting site. Extensive implementation of these packaging methods has a long way to go, but adoption of Eco Film® II can be one step in that direction.

Take a Step Forward with Cortec®If you are interested in the potential of backyard compostable film technologies for distribution or use, contact Cortec® to learn more about custom options and discuss certification needs: https://www.cortecvci.com/contact-us/

We use cookies to ensure that we give you the best experience on our website. If you continue to use this site we will assume that you are agreeing to our Privacy Policies.
All search results